Half Moon Bay Farmers’ Market: It’s All About the People 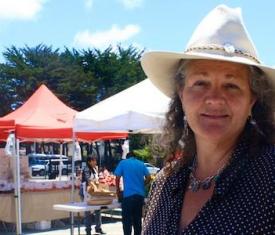 Half Moon Bay Farmers’ Market: It’s All About the People

What does it look like when you combine local farmer control, comprehensive community involvement, and diversity of participants? The day that I got to visit Half Moon Bay Coastside Farmers’ Market it looked something like this: three lines of bright white tents nestled beneath blue sky and rolling hills, buzzing with people. Nearly everyone seems to know each other, and if they don’t, they introduce themselves. People are checking in, meeting, embracing, spending time with their neighbors, and buying their groceries. The sense of belonging is palpable, as if every person there understands the deeper meaning of having a place to build relationships and community. This is no ordinary market.

My name is Larissa Kaul and I am a recent graduate from the University of North Carolina, Chapel Hill. As an intern with Roots of Change, I was given the chance to uncover the story of the Half Moon Bay Coastside Farmers’ Market, this year’s runner up for Best Market in the ABC-7 annual competition. Not only is Half Moon Bay award-winning, but it redefines the importance of farmers’ markets and embodies the emergence of something Roots of Change defines as a New Mainstream, or best practices and ideas that are becoming trends in food and agriculture. Half Moon Bay is a brilliant example of how a new type of farmers markets is being realized throughout the state. A market that embraces the need for farmer control, community engagement, and participants with diverse methodology, as well as an advanced understanding of how to build relationships with each other.

I believe that so many of today’s urgent and systemic problems, like environmental degradation and access to healthy food, can be linked to a growing disconnect between ourselves and our surroundings. Farmers’ markets similar to the one at Half Moon Bay have the power to remind us of what it’s like to know the person that grows the food we eat, to care for our neighbors, and to sustain the local worlds we have created. The fact that Half Moon Bay has received so much praise recently tells me that the food movement is creating new dialogue with new priorities. It’s becoming part of the New Mainstream in food and agriculture to see beyond just the buying and selling, and to value the interconnectivity, joy, and cohesiveness that a marketplace can bring to a community. It’s a tangible manifestation of what can happen when we refocus on what makes us prosper as human beings. My trip to Half Moon Bay gave me the opportunity to learn how a market that fosters these ideas can operate.

The market manager Erin Tormey, had the opportunity to create a market with a new model ten years ago; one that began with putting control in the hands of local farmers. Most farmers’ markets have farmers coming in from all across the state, making something like a farmer-centered model very difficult.

“The very first day of the very first market, there were a number of farmers there, all from this area that had never actually met each other…The higher purpose that it serves is that it allows farmers of this community to actually be a part of their community.  They get to hang out together once a week and learn.”

The farmers aren’t the only ones invested in the market. From the beginning Erin made it a point to engage all areas of the community, including the “entrepreneurial community, the nonprofit community, and the shopping community.” She only allows “locally based, health-focused, mom and pop-type” businesses to sponsor, to ensure involvement is kept local. She also gives space to local nonprofits in exchange for an email blast about their presence at the market to donors. That outreach effort paid off. A few years ago, Erin had to relocate the market with only a three week notice, and the community stepped in to help mitigate the unexpected expense associated with the move on the strength of a single email she sent to her network explaining the situation. “It was amazing. Almost 250 people in the community, within hours, sent me notes, sent me stuff, sent me twenty bucks.” The market had become a source of pride and meaning for many people, which created a crucial network of support.

Half Moon Bay’s market is not only a place to sell produce but a venue for a multitude of perspectives and projects. You can find nonprofits, business cooperatives, florists, and farmers from all backgrounds and practices – an economic hub. There are farmers like Airielle Love from Fly Girl Farms who fell into agriculture based on her own personal motivations, and then there are folks like Farmer John whose family has been growing in the area for 65 years. “They have been able to find out about emerging techniques and practices of the new generation of farmers coming to the area. For example, Farmer John is a lifelong conventional grower who is interested in the transition to organic practices occurring in coastside agriculture, and when he has a question or idea, he’ll wait till Market day and ask Airielle.”

If you follow Erin’s path on a typical morning at the market, you’ll see dozens of people gravitate toward her, shopping bags in hand, smiling warmly and offering handshakes, hugs, and a question here or there. If you look beyond her you will see a ripple effect of the same interactions, repeating endlessly. The market’s combination of local farmer control, comprehensive community involvement, and diversity of participants turned it into a community gathering place, a reincarnation of a tradition that is difficult to find today. The fact that the market continues to have a resounding impact on the people involved as well as the people who visit it makes me believe that it is a growing tradition. It’s becoming part of the New Mainstream to see farmers’ markets as a chance to reclaim our community and its true purpose. Let us be inspired by innovative markets throughout the state and share our lives and our wisdom around something we cannot live without: food.

Larissa Kaul has a BA in Studio Art and Communications, with a minor in Social and Economic Justice. She continues to find inspiration for her future path in peoples movements, art, and travel.