The Los Angeles Food Policy Council: A model for the nation 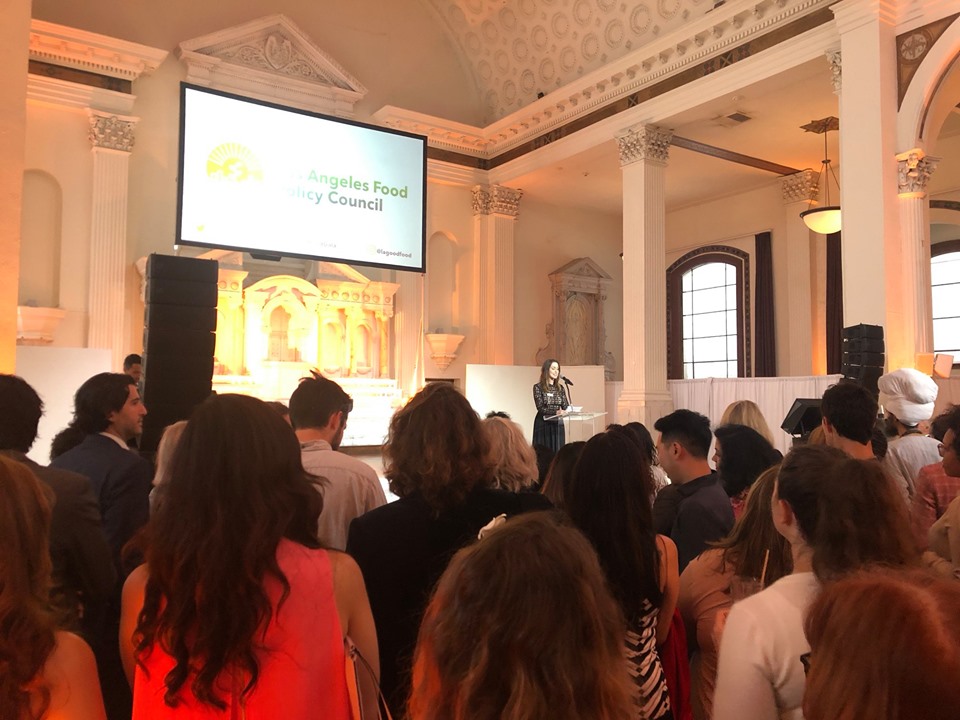 The Los Angeles Food Policy Council: A model for the nation

More than at the state level, and certainly more than at the federal level these days, food activists have traction in cities and counties. They are making good things happen. The best example I can think of is the Los Angeles Food Policy Council. On Thursday, June 21st, the summer solstice, I travelled to LA to join the crowd celebrating the successes and allies of the Food Policy Council at its Annual Gala.

I am a bit biased in my love for the LA Food Policy Council because Roots of Change was a close ally during its founding. Back in 2009-10, we worked with attorney and sustainable food system advocate, Paula Daniels, when she launched the Council while serving in the Administration of Mayor Antonio Villaraigosa. Roots of Change facilitated three meetings in different venues with stakolders from the core of LA’s food shed, a geographic footprint that stretched from Bakersfield to San Diego. The goal of the meetings was to help Paula’s team define the vision for the Council and the future food system of this great city. The resulting Good Food for All Agenda become the guiding star for the birth of the Council. Roots of Change also hosted the kickoff celebration at the then newly opened Vibiana. This amazing venue is a restored Cathedral just a few blocks from City Hall. It is operated by culinary power couple, Neal and Amy Knoll Fraser, of the famed LA restaurant, Red Bird.

Last Thursday’s Gala was a very similar event, with more than a dozen of LA’s top chefs, including those from Red Bird, preparing small plates of delicacies for the attendees. Here is the Council’s Executive Director, Clare Fox, describing the purpose of the Gala:

It’s been ten years since the announcement of the Food Policy Council, which was right here at Vibiana with Roots of Change. This is a very important historical place for us. It’s the launching pad. There are 400 people here. It is just incredible how people are coming together under the banner of good food for all and that we are recognizing that good food isn’t just nutritious, but it has to do with the way that its grown, respect for workers, respect for the planet. People are clearly getting that message that it’s a holistic vision of good food for all. We cannot leave any community out…For those of us who do this work on a daily basis, we know how wonky it can get, but the fact that we have 400 people here, celebrating with us, having a party, and really getting the message speaks to how this movement is growing. Each and every one of the good food heroes that were honored tonight are true inspirations to me personally. We honored Senator Holly Mitchell who is a phenomenal defender of the social safety net, of public food programs, expansion of CalFresh to marginalized communities that haven’t always accessed that benefit. She’s been a rock-solid advocate for health equity for communities of color. We also honored Insurance Commissioner Ricardo Lara (formerly Senator Lara). He was pivotal in passing the California Safe Sidewalk Vending Act. Essentially that bill decriminalized sidewalk vending.  Lastly we honored the CEOs and the social impact team of Sweetgreen, an incredible partner with us through the Healthy Neighborhood Market Network Program. They brought serious investment of time, energy and resources to Hank’s Mini Market in South LA, a legacy African America owned business, to bring fresh food, art and safe spaces to the community. We wanted to honor and recognize them for that.

Here is one of the Council’s most important long-time leaders, and its former Chair, Joann Lo, head of the Food Chain Worker’s Alliance, describing perhaps the most important Council achievements in recent years:

I was co-chair of the working group that created the Good Food Purchasing Program, which is now a national program. It is an institutional food purchasing policy. We have focused on public institutions so that we direct our public tax dollars to purchase food that meets our values. The policy includes standards around five values: supporting local economies, environmental sustainability, good jobs, humane treatment of animals and healthy food. It’s impacting hundreds of millions of dollars of public purchases of food.

When I asked Joann, why she thinks the Council has been so effective, she said, “it’s been the leadership” and she named Paula Daniels, Alexa Delwiche who now heads the Center for Good Food Purchasing, and Clare Fox. She went on to say that “they have a vision of being very inclusive, opening the food policy council to everyone who cares about food and justice and working on a diversity of issues. They made it a point to be clear that food is about bringing people together to make an impact and that is what has happened.”

As Joann says, leadership is the key. Food policy councils need effective leaders who bring people together. They must attract resources. And most importantly, they must invite the people they serve to set the goals to be pursued. If they do this, it is much easier to build power by winning support from those who lead public and private institutions, that have the ability to change policies and practices within our society. LA has done this beautifully.

The new street vending legislation mentioned will help build economic opportunity for many people previously hidden in the shadows of our economy and society. The Good Food Purchasing Program is now adopted in communities across the nation, including San Francisco, Denver, Chicago, Cincinnati, The Twin Cities, Buffalo, Boston, New York and Washington DC. This program is changing the marketplace and feeding millions of people good food. Please don’t miss our September 19th, Flipping the Table podcast episode with Clare Fox. She will share more success stories from the history of the LA Food Policy Council, a food policy council model for the nation.

I encourage you to google “Good Food LA” or the “LA Food Policy Council.” Once you’ve been inspired, as I know you will be, please donate to support their good work. Think of it as a vote for your food.