Taking Back the Streets through Urban Agriculture 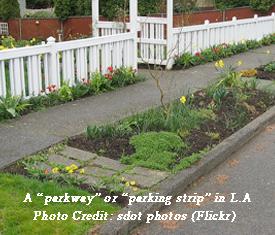 Taking Back the Streets through Urban Agriculture

In the past few years in South Los Angeles, there has been an emergence of innovative practices in urban agriculture taking place. Creative and efficient uses of city-owned parkways – the strips of earth between the sidewalk and curb – are being used for fruit and vegetable gardens. Given the social and economic context of many Los Angeles neighborhoods the rise of alternative methods to grow your own food is not completely arbitrary. In some parts of Los Angeles, such as Watts, many families are living at or below the Federal Poverty Line, crime rates are among the highest in the area, adequate food is difficult to access, and obesity rates are among the highest in the state. As a result more and more community members of South LA are uncovering how urban agriculture can benefit their communities. Community members are utilizing the power of urban agriculture to challenge economic, social and health inequities from the ground up and finding alternative solutions through urban landscapes. The emergence of these innovative practices and the overwhelming support it has garnered epitomizes the ‘New Mainstream in Food and Agriculture’.

The use of parkways as sites for edible landscaping in South Los Angeles has emerged as a component of the food justice movement—a framework for empowerment in which the poor, oppressed and underserved assert their rights through the power of self-respect and community organization. One of the major challenges the South Los Angeles food justice movement is facing lies in contradictory legislation that prevents people from using public land for the public good. For example, Los Angeles residents are currently required to maintain parkways adjacent to their home as long as the parkway area is grass, standard bushes or trees, no fee is required. If the resident wishes to use that parkway space—which is city-owned—to grow fruits and vegetables they must first obtain permits, which cost at least $400, through an incredibly time-consuming process. For small plots that are not expected to make much money, if any at all, and for largely working class communities, that amount is no chump change.

Furthermore, even with the permits the current legislation that exists prevents community members from growing their own food. The parkways issue therefore is twofold: the first is that inexpensive and otherwise abundantly available land is currently underutilized in terms of its food production potential; the second is one of land ownership, where oftentimes the challenges many communities face are rooted in inequitable distribution of entitlements to capital, power and land.

What’s one solution, then? By involving the community to identify and work together to change the laws and ordinances that impede their work will help better meet their needs. An example of a community leader leading the way is the story of Ron Finley of South Los Angeles. Ron a community activist gained the title “guerilla gardener” due to the illegality of some of his actions; yet people like Ron and his neighbors are the one’s that are realizing the potential that unused lands hold. The 10’ by 150’ plot in front of his Crenshaw home, supports numerous fruit and vegetable varieties, it’s also supplementing his family and community’s diet, functioning as open space where residents can play, rest and learn – promoting community cohesion.

Ron and others like him are challenging notions of land ownership; when, where and by whom our food should be grown; and how community can be run. Such a challenge is a call for what vibrant, sustainable, equitable and local food systems require: self-determination and an opening of spaces for communities to meet their own needs. In a neighborhood where the ravages of structural inequity have manifested into the health, social and economic disparities, Finley’s efforts (and he is by no means alone in his approach) are reintroducing justice into the equation. With pushback coming from many directions, even the most seemingly benign barriers such as parkway regulations, the road ahead for places like South Los Angeles is a long one, yet it is one filled with numerous opportunities for change.

Finley’s efforts have garnered a great deal of community support, from running a successful online petition to working with the local city government. Another entity working to support the challenges facing urban agriculture in L.A is the Los Angeles Food Policy Council (LAFPC). Though still in the process of defining their role, the resources that the LAFPC is providing in support of such transformative efforts are extremely valuable. Whereas most urban agriculture efforts traditionally take shape in schools, vacant plots of land and backyards, Finley’s efforts and the efforts of the community, the LAFPC, and some members of local government, are altogether reimagining urban agriculture as a perennial part of the urban landscape – a planned part of the city – that would help promote economically, socially, and environmentally just and equitable living.

Such parkway efforts, therefore, epitomize elements of what we see as the ‘New Mainstream in food and agriculture’. Finley and his South Los Angeles community are clear examples of how a localized, ecological, affordable, equitable, and healthy food system is being realized and can be modeled throughout the state. Though many other cities are approaching urban agriculture differently and in ways specific to their historical, political, environmental and social contexts, parkways remind us that there is always room to imagine and create, oftentimes amidst much resistance, new spaces to let substantial change and community betterment to occur. Urban agriculture therefore, is one part of the ‘New Mainstream’ because it is increasingly no longer an alternative method of food production and community development, tucked away in backyards or behind chain-link fences in formerly-vacant lots; more than ever it is becoming visible from our streets and our front door.

Hossein is a first year PhD student at UC Berkeley in the department of Environmental Science, Policy and Management. He is passionate about agroecology, agrarian reform, policy, and social justice.