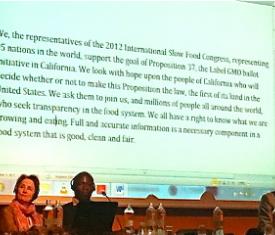 October 29, 2012 Roots of Change
October 29, 2012
Turin, Italy — ROC President, Michael R. Dimock, introduced the following motion at the Slow Food International Congress in Turin, Italy. 650 delegates representing 95 nations unanimously adopted the motion. Slow Food founder, Carlo Petrini, gave an impassioned closing speech in which he emphasized the critical nature of this California vote. He said that given the amount of money the industrial food corporations were spending to kill the initiative, it would be great achievement if it passed, and that all delegates would need to celebrate around the world.

"We, the representatives of the 2012 International Slow Food Congress, representing 95 nations in the world, support the goal of Proposition 37, the Label GMO ballot initiative in California. We look with hope upon the people of California who will decide whether or not to make this Proposition the law, the first of its kind in the United States. We ask them to join us and millions of people all around the world who seek transparency in the food system. We all have a right to know what we are growing and eating. Full and accurate information is a necessary component in a food system that is good, clean and fair."