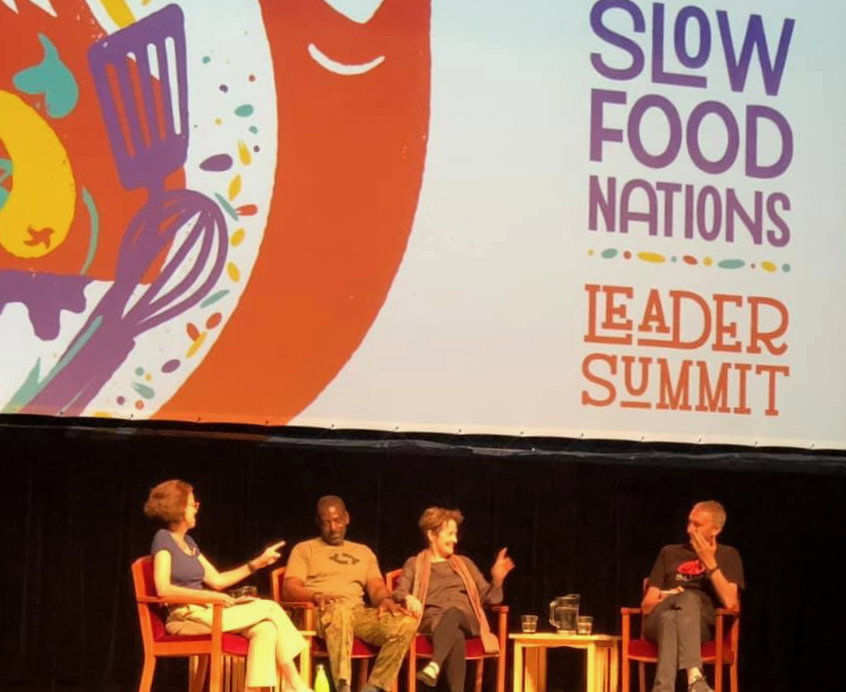 I wanted to offer some final thoughts related to Slow Food, following the trip I took to Denver for the 3rd Annual Slow Food Nations event in Denver, Colorado. First some context: I became a dues-paying member of Slow Food in the mid 1990s and remain one to this day. In 1997, I founded the Russian River Chapter in Sonoma County. It has been one of the most active and successful in the nation. Its success grew from the fact that we always had a large volunteer leadership team that shared the burdens of running a chapter that had literally hundreds of members at its peak and over a thousand people on its email list. We put on many educational events every year and launched several projects that continue to this day. We have raised tens of thousands of dollars for community food projects. I was a member of that team for at least 15 years and it taught me a lot about organizing and leading and it gave me life-long friends.

Because of Russian River’s accomplishments, I was asked to join both the US and International boards of directors and spent many weeks over many years working with Slow Food founder, Carlo Petrini, and the recently elevated leader of Slow Food International, Paolo Di Croce. I stepped off those boards in the middle of the 2000s when I took my job at Roots of Change. Even then I remained connected and worked with Anya Fernald and the team that put on the monumental 2008 Slow Food Nation in San Francisco that helped put the food movement on the radar screen of the major media outlets of the nation. Roots of Change provided funding, developed the event’s policy statement, the Declaration on Healthy Food and Agricuture, and the rally where the document was first read in San Francisco City Hall. We also organized and hosted on the first day, a gathering of 600 activists from across the land, which was called Changemakers Day. So, clearly, I am biased in my views of the organization, but also willing to see its light and shadow. Having admitted that bias, I offer the following thoughts about Slow Food and its future.

Thought #1: Despite the criticism that it is elitist, Slow Food has always been a middle-class movement in the US and abroad. Yes, here in the US, it was first populated by foodies and is certainly dominated by white folks. Yet, these were, and remain, what I would label systems foodies. This means they are people who understand, that what we eat, impacts culture, local economies, worker lives, ecosystems, the treatment of livestock and certainly farmers and ranchers. And most members are the type of people committed to life-long learning, and they have evolved. My primary evidence of this evolution is the increasing embrace and commitment to equity, inclusion and justice. Since the earliest years, Slow Food has focused on and supported Native American communities and, for at least a decade, it has worked to include African American farmers, chef, activists and makers. I will say, more must be done to effectively include Latinx communities in its activities. But there is steady progress. In Denver one could see that the movement is less white than in the past.

Thought #2: Today the movement’s dynamic centers are Africa, Europe and Latin America. The movement is having real impact on those continents. For a brief time in the mid 2000s, it was the United States. It was in those years of peak membership and action that Slow Food USA was a major catalyst that brought memes, language and framing that impacted many people across the nation. Author Michael Pollan and Civil Eats’ founder Naomi Starkman in media; Woody Tasch and Arno Hesse in finance; Anya Fernald and Patrick Martins in business, are just a few examples of changemakers who, for a time, placed their focus on Carlo Petrini and the major events mounted by Slow Food.

In part because of Slow Food’s impact, there are now thousands of nonprofits, big and small, that are actively seeking to transform our food system to produce good quality food, clean food free of poisons and fair food that has come from respected and rightly compensated food chain workers. This is what Slow Food has sought. Yet it also means chapters face more competition for charitable contributions, public mindshare and participation. I see this as an opportunity to grapple with honing the movement’s unique and valued role within a larger and more dynamic ecosystem of organizations.

Thought #3: Slow Food owns a sweet spot related to convening and uplifting small producers. No organization in the food space that I have seen can assemble, feed, educate and entertain a crowd like Slow Food. The first big event I attended in the USA was held in a beautiful barn in Bolinas, California, in 1999. It was the first US summit meeting of leaders and it was dynamic, with debates and inspiring talk, from many quarters. The chefs from Chez Panisse roasted a whole pig roast on a spit and served incredible vegetables, salads, potatoes and beverages. I was lured into regional and national leadership because I met cool people, trying to the change the world and they knew how to cultivate joy, dare I say pleasure, by throwing fabulous parties, parties with a purpose. I found this fun-loving quality, very rejuvenating in a world mostly deaf to my hopes for change.

My second event was the 2002 Slow Food Awards, no longer given, which were like the academy awards for food producers from around the world who were saving endangered foods and cultures. It was held in the Opera House in Naples, a place of golden and red splendor. I wept through most of the event as one after another, small-holder, often indigenous farmers, fishers and food producers, came to the stage in their traditional dress to receive an award and offer remarks about their work and shrinking their worlds. I remember bright colored wraps, hand-made beads, animal skins, feathers and piercings. I saw looks of pride and humility all at the same time on the faces of awardees. This ceremony was followed by an international congress of leaders that included a huge meal in the ruins of Pompei, with food prepared by Italy’s top chefs.

And then, of course, two years later, in 2004, there was the first mind-blowing Terra Madre event, linked to the Salone del Gusto. If interested, you can hear a bit more about that amazing moment in time by listening to my conversation with Paolo Di Croce on the Flipping the Table podcast.

Suffice it to say, the first Terra Madre was among a few peak experiences for me. Slow Food invited and paid for nearly 5000 small producers who were saving biodiversity and culture from around the world. Most had never left their home regions. But they came to Turin, Italy to be honored and to share space in order to learn and gain strength from one another. I worked with a small team that included the special event organizer and chef Ali Ghiorsi and Anya Fernald, for nearly a year to send hundreds of delegates from across the US. We raised the money to offer travel stipends to all who needed them. On the event’s second day, a spontaneous marketplace emerged in which the delegates bought or traded with one another. No other organization seeking food system change had, or has, ever so honored and so elevated small producers in a world where they are minimized and crushed by industrial food and globalization. Terra Madre supercharged Slow Food’s growth and forever bonded small producers with the organization.

What other organization has had the vision and the hutzpah to pull off such transformational events. None that I can see. Slow Food is a master of convening and uplifting small producers to help them survive. This is a needed role and I hope the US continues to hone its chops at creating such events in the US. Slow Food Nations in Denver is a manifestation of that effort and I hope to see many other regions take up with equal gusto the challenge of mounting large events.

My final thought: As with the entire food movement, leadership is the key to Slow Food’s future. Carlo Petrini and Paolo Di Croce at the international level; Krista Roberts in Denver, Julie Shaffer in Atlanta, Jennifer Breckner in Chicago, Charity Kenyon in Sacramento, Paula Shatkin and Max Caruso in Russian River, are among a large group of model leaders. Their commitments, and many more like them, are the keys to Slow Food success. The movement needs people willing to assume responsibility as volunteers, who truly reflect Slow Food’s progressive and inclusive values and who take action, action and more action that touches people in their communities.

Slow Food USA was slow to develop a robust way to remove lackluster, manipulative or inept leaders from its midst. Chapters flounder because leaders do. Better to close chapters or fire leaders, yes fire volunteer leaders, then to let them become dysfunctional.

My hope is that Slow Food places its focus on better methods to recruit, train and recognize leaders. This could go a long way to revitalizing Slow Food USA’s impact on the nation. It needs skilled networkers, evangelists and diplomats that effectively invite, inspire and organize action. I also hope Slow Food USA develops a crack events team, as Slow Food International has done, to mount stupendous convenings that capture the imagination of people and inspire them to rally around those who protect our agricultural and food biodiversity.

Despite what some are saying, Slow Food is still very cool. As all organizations, it has been going through a needed period of re-formation. Roots of Change and many of our allies have certainly had them. Although only a chapter member these days, I remain committed to Slow Food’s development and role in the food movement.