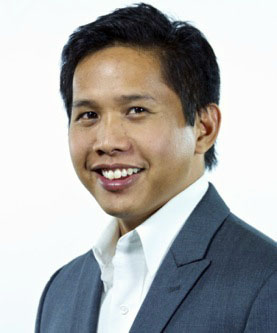 You just returned from the Philippines. What was the inspiration for your trip?
My younger brother graduated from nursing school with his BSN from UERM, so it was a big family celebration. It also served as a postponed honeymoon for my wife and me!

Who in your family has influenced you most in your work today?
I have to cheat and say it was both my parents. They instilled a strict moral code, a strong work ethic, and a deep sense of family and Filipino culture in my siblings and me.

Before joining ROC, you were at the Greenlining Institute. How do the issues you worked on there connect to ROC’s food system change mission?
Previously, I worked on racial and economic justice in the healthcare sector, in areas like the Affordable Care Act (aka Obamacare) and nonprofit hospitals’ community benefit programs. That work greatly intersects with ROC’s mission and history because the food system is one of the most significant determinants of our health.

We’ve all heard apt comparisons between policy-making and sausage-making. Are you hopeful about food system policy change in California?
Earlier in my career, I used to think the same thing. But not anymore! Fortunately, California isn’t the policy black hole that Congress currently is, and we find ourselves in a moment in time where we can realistically get progressive food policy passed in our state legislature. Assemblymember Phil Ting’s 2013 Urban Agriculture Incentive Zones Act (AB 551) is a great example of this.

You spent several years in the Peace Corps, then worked on health policy. What drew you to the food world? What challenges in the CA food movement feel most pressing to you?
It was during my Peace Corps stint in Namibia that I began to develop my understanding of food and food systems as a public health issue. You really have to work hard NOT to notice this connection when your fellow villagers are severely malnourished or aren’t taking their life- saving medications because it’s too painful to do so without food to eat. As much as I can, I try to reframe our challenges in the food movement as opportunities, and believe that the 10 Guiding Principles of the California Food Policy Council serve as inspiration for the good fight.

Who are your food system reform heroes?
My food system heroes are the champions I’ve met, like Kelly Carlisle of Acta Non Verba, Rosie Cerna from the Woodland Farmers Market, Ken Hecht, and visionary organizers like Cesar Chavez and Larry Itliong. In this position, I look forward to crossing paths with many heroes in the making, who are working on the ground to ensure that all Californians benefit from an improving food system.

What do you love about living in Oakland?
I’ve lived in Oakland for 3 years now, and love its diversity and history. While I still have a place in my heart for my hometown, Riverside (shout out!), nothing beats the combination of a food scene on the rise, public transit access, and the spirit coursing through all of Oakland’s neighborhoods.