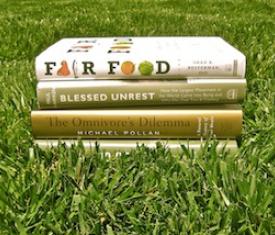 July 19, 2012 Roots of Change
“Food is not just relevant, but critical to dozens of disciplines. It’s agriculture; it’s business; it’s health; it’s the economy; it’s the environment; it’s international relations; it’s war and peace.” – Jan Ellen Spiegel, “Truly Food for Thought”
When Roots of Change (ROC) started searching for summer interns, the pool of applicants embodied something ROC has seen more and more – rising interest from a younger generation. My name is Juliana Rodriguez and I’m one of three interns working at ROC for the summer. Beyond that, I’m a student at Brown University majoring in Environmental Studies with a focus in sustainable food, and I belong to the first generation that isn’t expected to do as well as our parents. Maybe this doesn’t sound relevant to my status as an intern, but let me explain. The face of today’s ROC intern belongs to a young adult who has different expectations of our future and the future of food and farming. We also have a surprisingly significant background in what we know as food studies. This isn’t just happening here in our office though; rising interest in food studies far exceeds ROC candidates, it’s visible across the country. But why? What is it about my generation that makes this the time to reevaluate the role of food in our lives?

Let’s start with the rise of food studies programs. They first appeared in the mid-90’s at New York University and Boston University; what began as a curricular niche quickly dove in to the academic mainstream and has taken root nationwide in the last 20 years.  The influx of food literature in the same period has doubtless impacted the popularity of these courses – students and teachers now have the luxury of calling books like Eating Animals and Fast-Food Nation textbooks. It’s true that these books are more accessible than their dense predecessors, but this still begs the question: why is the subject matter so attractive to students? It can’t just be some inextricable love of food – we certainly aren’t the first generation that loves to eat. We are, however, the first that might meet a child with type 2 diabetes in an elementary school classroom. We are living in a time of unprecedented public health catastrophes, environmental degradation, political disunity, not to mention we carry the greatest student debt ever, and the fact that my college degree will do little to guarantee employment. As one of my coworkers put it, “we have limited possibilities.” But this is where it gets exciting! From this position of disadvantage arises a creative moment, an opportunity to see where disciplines intersect and inform each other, with food as a lens. I believe that food has become a tool for creating a different kind of future.

My generation has realized that to take a bite of food is no small act, that the implications of what we choose to eat are more far reaching than ever before. Our food choices not only impact our health, but also the environment, labor practices, economies, and political landscapes. While we scramble to make sense of the unparalleled challenges we face in this era of uncertainty, the potential of the food movement to respond to these questions in a practical, grounded way is ever apparent. As hectic as the times may feel, the food movement is a blessing in disguise; it provides us the opportunity to see new multifaceted connections, to involve a diverse group of perspectives, and to answer the craving for interdisciplinary exchange we need to solve so many of today’s problems.

But could this all just be a fad? I decided I’d ask my fellow interns for their perspectives.

Hossein Ayazi uses his own experience to show it’s more than a trend. Ayazi explains, “A year ago when I started my graduate career at UC Berkeley, I came in with what I thought were fairly disparate research interests around food and sustainable agriculture. Through my studies and interactions with people from all over campus and the community, I began to realize these two fields encompass a world so deep—one with culture, identity, place, history, health and livelihoods, justice, sustainability, the environment, the list goes on and on—that my interests can’t at all be disconnected or the work surrounding them a fad. How can something so central to society be just a trend, especially with the passion and knowledge that I am seeing behind it? Sure, parts of it come and go in the academic spotlight, but as long as scholars remain grounded, engaged, and learn from where these things are happening across the globe, food and agriculture, as the new mainstream, will be a way to connect many movements for change out there.”

My other teammate, Oliver Tully, has a similar take.

“The sustainable food movement is no longer seen as merely a priority for a select few, but rather a necessary solution to a systemic problem that has far-reaching consequences,” he says. “That sustainable food is now part of a new mainstream is evident in its increasingly central position within both national and personal-level conversation. As people acquire an extended awareness of the broader impacts of food production, they recognize the intricate connections between personal consumption and the entire food system. With expanded awareness individuals are gaining an understanding of the need to make lasting change at all levels of society.
It seems to me that the environmental and social impacts of personal food consumption are on everyone’s mind; sustainable food is no longer a niche field but a powerful mainstream movement that is bridging cultural, political and generational divides.”

So, do I think my generation’s growing interest in food is just a fad? Far from it; I believe it’s finding a permanent place in our culture.  A generation of individuals forging connections to how food production and consumption shape the modern world and making strides toward improving the system – this is what the new mainstream looks like. In the following weeks my teammates and I will give you an inside look at individuals and projects throughout California that embody these values. Stay tuned as we continue to define this new mainstream in food and agriculture.

Juliana Rodriguez is a rising junior at Brown University from New York City. She’s uncertain what she’ll do after college, but is confident that she’ll find a place in the food movement.