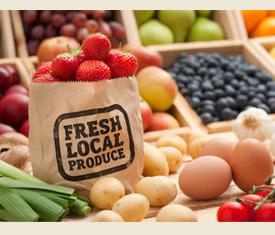 The demand for local and sustainable food has exploded in recent years. We are seeing that more large-scale retailers, institutions and individual consumers are eager to acquire food from local and regional sources in an attempt to curb the harmful economic, social and environmental impacts of industrial agriculture. But the current high-volume, long-distance food system is not sufficiently designed to support the growth of local small-scale agriculture. The consolidation of production under Big Ag businesses over the past several decades has made it increasingly difficult for small growers to access larger markets and challenging for some consumers to buy healthy local food. However, local and regional food systems have the potential to increase production capacity for small growers, promote local economic growth and job creation and improve access to healthy food, among many other benefits. As a result, the desire to buy from local sources is blossoming into a mainstream nation-wide movement, as growers, distributors, processors and others are responding to the increased demand by altering their business plans to prioritize local food.

One popular method for developing local and regional food systems has been the creation of food hubs, which provide small and mid-scale growers access to services such as aggregation, processing, marketing and distribution. By collecting together the product from many growers and providing services that farmers would otherwise not be able to access on their own, food hubs enable local growers to enter larger wholesale markets and create an easier point of access for buyers looking to purchase locally sourced food.

Because every region has individual needs and requires a different set of services, food hubs, from the Local Food Hub in Charlottesville, Virginia to Detroit’s Eastern Market, exist under a variety of ownership models. These include producer and/or consumer-driven cooperatives, nonprofits, retail structures and hybrid models. Although each type experiences different barriers to growth, those involved with food hubs are committed to the goal of expanding local and regional food systems because they understand the many potential benefits they offer for everyone along the supply chain, including producers, distributers, consumers and others.

The expansion of food hubs across the country is indicative of a new way of seeing the food system as a whole, from farm to fork. A major feature food hubs offer is their focus on meaningful partnerships between growers, distributors, processors, buyers and others. The emphasis on strategic business partnerships along the entire food value chain enables food hubs, and those who work with them, to share similar goals, such as fair prices for everyone, healthy food access and environmental stewardship. By working closely with many aspects of the food system, food hubs help to foster an understanding that everyone who works in the food system is a valuable partner. Food hubs and the preservation of the local identity of food products also have the ability to help consumers see the food system as the connection between many vital components and people.

The demand for local sustainable food is now very much part of the ‘new mainstream in food and agriculture‘, and food hubs are one of many promising attempts to strengthen local food system infrastructure. Food hubs still have many challenges to overcome, but they nevertheless indicate an exciting direction for the food movement and a commitment to transforming the food system. The growing passion across the country for local food demonstrates the expanded appreciation for the individual relationships between workers that support the whole system and which have often been undermined by the industrial agricultural system. As they continue to become important parts of the new mainstream in the sustainable food movement, food hubs have a great potential to further spread an understanding of the complex chain of individual people that make up the food system.

Oliver is entering his last year as an undergraduate at UC Berkeley and is studying History and Environmental Science, Policy and Management. He is fascinated by how food can bring diverse communities together and is eager to start a career in the sustainable food movement.