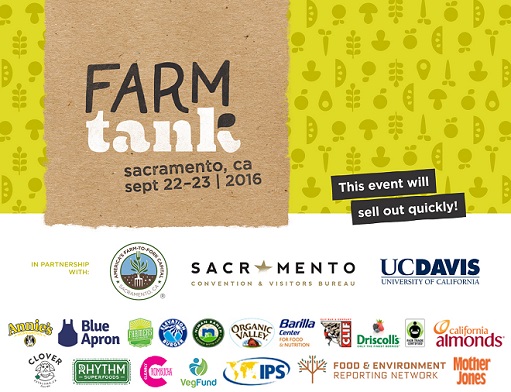 Good afternoon! It has been a pleasure and an honor to share this day in which we heard from an amazing line up of inspired, inspiring and action oriented speakers. Let’s hear it for them all!

So I am the last guy keeping you from the libations and fun. So I will share a few brief thoughts about the exciting moment in which we are living. I want to tell the story of the food movement’s growth so that we might see why we are succeeding. Today proves we are in the midst of revolution in thinking and that you are all on the frontline. But how did this happen?

Although its roots go back to the 1940s in the UK and the Soil Association, I will shorten the story and say here in the US it all began with organic farmers in the 1960s. About the same time, Cesar Chavez and the UFW made it clear that poverty wages were unjust and that farmworkers deserved better. [As was pointed out in a Tweet following my remarks, I was reminded that the Black Panthers began a breakfast program for school kids around the same time. This could rightly be seen as the beginning of the food justice movement.] In the late 1960, UC Santa Cruz and Alan Chadwick pierced academe and planted the first seeds that have slowly moved universities to accept organic farming. As these two movements grew in the 1970s, Wendell Berry began writing on the conflict between the industrial and rural economies. As if to prove his point, the farm economy in the Midwest crashed in the early 80s, killing tens of thousands of family farms. And people responded. Farm Aid and many other groups were born and began to aid family farmers. Also in the 1970s Francis Moore Lappé wrote, spoke and launched a conversation about a more healthy diet for our small planet. While farms crashed in the Heartland of America, Carlo Petrini and the Slow Food Movement in Italy, gushed down from the hilltop villages of Piemonte and Tuscany to point out the harmful impacts of fast food on culture, biodiversity and flavor quality. This was also the time when, spawned by Alice Waters and others, farm-to-table restaurants began to emerge in larger numbers. It was still only the late 80s and early 90 when these new springs of thought joined with the organic and family farmers and farmworkers to begin the erosion of old thinking.

Then in 1990, Congress passed The National Organic Production Act and the organic label appeared. This helped accelerate the farmers’ market movement, resulting in nearly 8000 farmers markets today, generating a $1 billion in revenue per year. It was also in the early 1990s that very forward thinking philanthropies like the Columbia, Heller and Kellogg foundations begin to support advocates and academics fueling the work. As a result, the 1990s saw immense growth of the natural products industry. Whole Foods and thousands of local natural food stores emerged to help farmers markets drive consumer awareness. In the late 90s, early 2000s the food justice and urban agriculture movements began to take hold with the growth of entities like The Food Project in Boston, Growing Power in Milwaukee and City Slicker Farms in Oakland. These groups helped reawaken cities to food production. So, by the early 2000s, one could say a movement was emerging.

This hint of a mass movement led Eric Schlosser, Marion Nestle, Michael Pollan and others to begin researching and issuing large numbers of media stories and books that added to the synergy. So by 2002, a supper rich environment for movement growth was in place with media channels, entrepreneurs, academics and advocates all calling for and working toward a more healthy and just food and farming system.

So today, these diverse streams have converged into a giant, but still forming social movement. Our struggle is to prioritize and move from the tactical, siloed activism we have been in, to a more strategic approach. And that is the challenge to all of us today.

But we must remember that our diversity, as in an ecosystem, is the key to health and resilience for our movement. We may be losing ground in one or more areas of interest for a time, but making progress in others. I cannot now imagine a time when we will not be making progress on some of the many challenges before us.

And we can always do better. And my first suggestion echoes Navina Khanna’s comments from before lunch. Every species in our ecosystem for change has a role to play and reason to be respected. We are stronger pulling together. NGOs without supportive businesses and informed consumers will make much less progress. Businesses without nonprofits that are educating, organizing and advocating would see slower market growth. And business and nonprofits need each other to do what must be a priority in the years ahead, and that is policy change.

Today, the federal policies that shape agriculture provide insufficient incentives for moving toward health and resilience by farms and food companies. The true cost of food is still hidden in most retail environments and those who are doing good work are undercut in the marketplace by those allowed to pollute and pay poverty wages. The current Congress seems unlikely to support major shifts in federal policy. But states could do a lot if we asked them to.

Effectively asking legislatures and governors to act is an art and a science that requires orchestration of many diverse voices, singing the same song. In California, the food movement has begun to be more strategically organized. We have been working to organize communities and this has birthed the CA Food Policy Council, which is comprised of 27 regions from San Diego to Del Norte counties, urban, rural, mountain, valley and coastal places. We are encouragingly racially diverse and becoming more so with each year. We have also worked to align these many communities with the advocates working here in Sacramento. Now the CA Food Policy Council is coproducing with NGOs working the halls of the Capitol an annual report on California legislation related to food and farming. This report highlights the principles and policy goals of the food movement and critiques the legislature and governor. It is a manifestation of the chorus singing one song in a rich and multilayered voice. This report shows policymaker that we are a political movement and increasingly powerful and they need to be accountable.

AND big things are beginning to happen. Primarily driven by the power of Latino communities and the unions, food chain workers from the field to the table have had wages increased through revision of the minimum wage law and for the first time farmworkers will be paid overtime like everyone else in the workforce. California has joined the federal government in funding nutrition incentives, providing $5 million dollars in matching funds to help SNAP and WIC families access more fresh produce via farmers markets, CSAs and farm stands. The California Climate and Agriculture Network and Community Alliance with Family Farmers, with support from many others, convinced our Legislature and Governor to fund a pilot program that compensates farmers for capturing more carbon in the soil. This makes farmers a solution to climate change and water shortages. Vermont’s GMO labeling law forced Congress to pass a federal law. Although seen by many as imperfect, the law opens the door for producers avoiding GMOs to clearly differentiate and ensure they capture the market for consumers who share our concerns about ownership of life and impacts on the ecosystem and farmer sovereignty. California, Iowa and Maryland are moving farmers to protect water quality and ground water supplies. The Los Angeles Food Policy Council devised the Good Food Purchasing Program, being taken up by cities and counties across the land, that sets health, labor, environmental and locality standards that will change how government buys its food items. These wins are important. They demonstrate that cities and states, not just federal government, are essential to reshaping the food system.

And we have a ways to go. Here in California, we must pass a statewide health impact fee on sugary beverages because it will unleash literally hundreds of millions per year to fund development of a new, more regionalized, food system. It will provide tens of millions of grant money for community food projects, healthier, more local school food, and provide hundreds of millions of dollars more for nutrition incentives. And as farmers and farmworkers earn more from higher wages and more sales of produce, rural poverty is reduced. Every sector of the food movement will be served by passage of a health impact fee on sugary beverages. It is a big policy, deeply resisted by beverage companies and retailers, but with better food movement coordination and strategy, it will eventually pass.

So in closing let me say, think big, work more closely with allies from other streams of the movement, create tools that place the focus on the need for policy change because the market alone will not change the system fast enough. The market alone will not ease the burden on farmers who need compensation for eco-system services very hard to capture in the price of food, particularly when poverty remains so pervasive.

Let me underline that we must avoid making farmers and ranchers our enemies. The conventional agriculture world emerged from what we taught farmers and ranchers to do. It emerged from universities and policies that asked farmers to “get big or get out,” to maximize yield, not health and resilience. We, the many steams of the food movement, have changed society’s directive to agriculture. We want much more from our farms and ranches, but as a nation we are accustomed to cheap food, which places producers in a very tough bind in a world economy where land, labor and environmental regulations are much less costly off shore. US farmers and ranchers need the public to help them achieve financial viability to deliver food chain worker prosperity, ecosystem services, improved public health and resilient ecosystems.

And we can do it. We will do it. We are too large, too representative of all of America’s communities to be denied our dream of making the food system the foundation for the world’s health and resilience. Thank you.