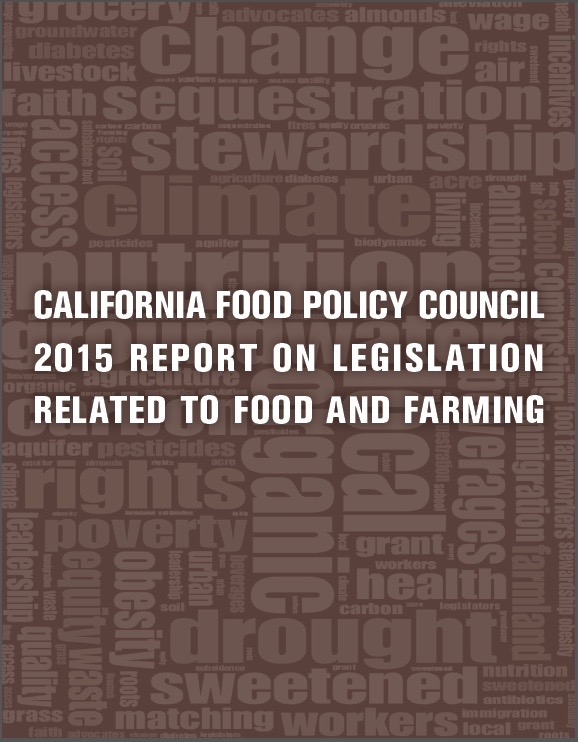 d, CA (November 19, 2015) – A report released this week by the California Food Policy Council (CAFPC) and Roots of Change reveals the 2015 food and farm policy votes of California’s 120 elected state legislators. The 2015 CAFPC Report on Legislation Related to Food and Farming illustrates how despite some progress on food and agriculture issues, the Legislature and Governor continue to miss most opportunities to pass bills that will actually have the greatest impact on the people most harmed by the challenges connected to California’s food and farming system. Wages remain low for food and farm workers, healthy fresh produce is more expensive, sugary beverages are overly consumed and the impacts of climate change are least addressed for those most at risk from heat, water shortages and poor water quality.

Created by 17 local food policy councils and 16 key nonprofits or advocates that form the CAFPC’s Food Policy Work Group, this report represents a unified perspective from a large number of constituencies representing the diversity of California: rural and urban, conservative and progressive, affluent and low-income. In order for the state to achieve significant policy reform their must exist a broad and active base of Californians from north to south and east to west, who are determined to push their legislators toward positive change.

Of the 18 priority bills tracked this year by the CAFPC, Governor Jerry Brown signed eight into law (44%). Included in this group were bills that end the subtherapeutic use of antibiotics in livestock (SB 27); improve the composting of organic waste (AB 1045 and AB 876) and create a nutrition incentives grant program (AB 1321) within the Farm to Fork Office of the California Department of Food and Agriculture, although it remains unfunded. SB 27 and AB 1321 are the first bills of their kind passed by a state. The Governor vetoed three of the tracked bills. The remaining bills stalled in committees or on the floor. “We continue to be impressed by the Legislature’s willingness to consider a broad range of food system issues because there are many needing attention. And we are disappointed that the Legislature missed its opportunity to help farmers and ranchers build soil as a means to combat global warming and drought (SB 367 and AB 761) as well as commit state funds for nutrition incentives. It is particularly frustrating that the Assembly Health Committee would not advance AB 1357 to create a revenue source for building local food systems through a fee on sugar sweetened beverages,” said Roots of Change President Michael R. Dimock. “That bill would transform our local food systems to greatly enhance the health of our families, but as the report reveals, the beverage industry and the California Chamber of Commerce funded members to block its advance, protecting corporate profits, but not our kids,” he added.

The biggest influence on California’s food and agriculture politics remains that of large corporations and trade groups. In addition to defeating the sweetened beverage fee, industry again killed Senator Mark Leno’s bill to add a cost of living adjustment to the state minimum wage (SB 3). Industry also stopped SB 32, which would have done more to combat global warming.

With this report, the California Food Policy Council completes its third successful year of collaboration on statewide food policy, and celebrates the addition of seven new members. The CAFPC now ties together the vision and goals of 29 food policy councils, 16 national or state policy organizations and 647 community based organizations seeking food system policy change. In addition to tracking legislators’ votes and the Governor’s actions on key bills, the report contains an analysis of the 2015 legislative session and a new section entitled the California Food and Farming Index that presents key facts that set the context and underline the critical need for food system change.